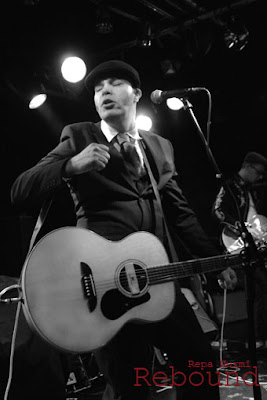 Repa Nurmi a.k.a Rebound Green, vocals, acoustic guitar; Artturi Ranta-aho, lead guitar; Tommy Rolex, drums and percussions and Rami Soini on doublebass.
Where in Finland are you from?

Well, we are from around different parts of Finland, so it’s not easy to get together, for example, for rehearsals but there is also a bright side: We fight less ’cause we don’t see each other everyday…
How would you describe your band for those who don’t know you?

I started to make music long time ago, but Rebound comes really different way. That was my project and I never thought this will be like a real band someday. I make Rebound first release “Bullets” CD-EP all by myself, but then I asked Tommy (Rolex) to help me with recording drum tracks. Soon I found out that I need better a guitar player and bass man if I want to make better quality. So the next step was really short and easy to take. That’s how Rebound was born…
What was the inspiration for your recent album?

I think every song I have made are somehow like a love song. Sometimes love is in the middle of the song, sometimes it’s just on the edge of the song. But there is always love in one way or other. Sure I can write a song about white ice-box, but who wants to hear what I got in my freezer? Only me, hahah!
What other releases do you have?

Under the name of Rebound we have made one 6-track mini album, 3-4 singles and debut album “Highways, Backsides & Sideways”. You can find Rebound from 3 diffirent collection albums too. And we have made 2 videos with Steve Gatlin. “License To Love” won best music video award in San Fransisco! White Trash Blues didn’t win anything yet, but it’s pretty cool video anyway… Actually, we shot our new video last weekend. That video will be out in a couple of weeks before we release our second album. When next album will come out, well that’s the question for me too…
What is your favorite song on your most recent album?

I don’t know, there’s so many…haha hah!
Do you have any gigs coming up?

Yes, there’s some gigs already sold for year 2011. So Rebound keeps me busy with the future too. At the moment we are taking a little break, ’cause we’ve got to train a ton of new songs…
What’s your favorite type of venue to play?

I have no “favourite type of venue”. I like to play everywhere. We have played in really small clubs, but also in big festivals. So, every time when the band is on fire and the crowds go wild, I feel like, ‘Wau, I am top of the world’! So the place or venue does not matter.
If you could play anywhere in the world this week, where would it be?

I’ve been playing in Finland, Sweden, Denmark, Germany, Switzerland, Holland, Italy and Great Britain, so if I could be anywhere, my choice would be some country where I have never been. I love to travel and see new places. Of course, it would be super cool to get to play in States..
Do you have a Website, MySpace, Facebook, Twitter etc?

I don’t know, my wild guess is that they probably like Stray Cats, Elvis, Johnny Cash, Melrose…But I could be wrong. Our latest single, “White Trash Blues”, went on Radio Rock download chart, so life is full of surprises. Radio Rock is a Finnish mainstream heavy rock station…
Are you signed to a label?

Yes, we have a contract with Jupiter Stroll Records, but it’s not a secret that we are searching for a new record deal for the next album. We try to catch some major label behind us, but one never knows what will happen…
Where do you think you’ll be as a band in 5 years?

I hope that we are still together and kicking! Life is full of surprises, so big success could be around the next corner. At the moment, I’m satisfied with our situation, we had go step by step to a higher and higher level, but honestly we are still pretty unknown. I don’t care about that and the matter of fact is that, it is a long way to the top if you wanna Rock’n Roll. And we are hard workers! Never give up!
Is there anything else people should know about Rebound?

We are such a good lookin’ guys and our live shows are full of good energy. We are better that anyone else believe or not, hahahah!
Lähettänyt king klo 11.58